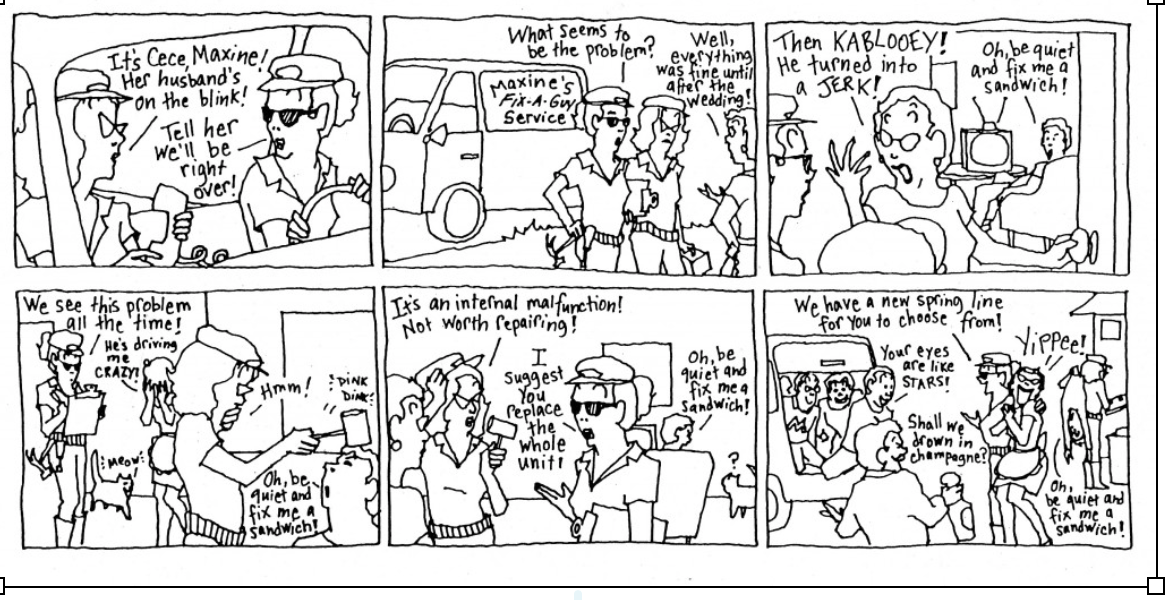 The writer/creative says “When I commit to an idea, I do fall in love with it and let it have its way with me.”

MARIAN HENLEY created the comic strip Maxine. *  From October 1981 until December 2002, Marian Henley’s Maxine “appeared in a head-scratching combination of publications such as San Francisco Chronicle, Heavy Metal, MS, Glamour, Austin Chronicle, LA Weekly, Utne Reader, Asbury Park Press, MAD, Funny Times, and (proudly, she adds) a newsletter for Hawaiian polygamists,” she says.  Marian received a grant to create live-action videos of two of her comic strips, and they aired on PBS and The Learning Channel.  “As everyone knows,” Marian says, “artists hate money and love to live in wretched obscurity, so it came as quite a blow when Maxine was then licensed by Quaker Oat for a national TV commercial and [I] actually had enough income to report to IRS that year.”

Marian has written three books to: MAXINE! a graphic novel (1987), LAUGHING GAS, a collection of her Maxine comic strips (2002), and THE SHINIEST JEWEL, a graphic memoir (2008).

* The young feminist Maxine, first published in 1981, is not to be confused with the old lady Maxine that first appeared in 1986 – although confusion became so rampant that, by 2002, Marian retired the strip in exasperation and now refers to it as Laughing Gas or, occasionally, “The Comic Strip Formerly Known as Maxine.”

Meredith: Does your creative process come from a place of something [unfamiliar] that scares you or from a familiar place of strength? What is that place like?

MARIAN: My creative engines have been roaring all my life.  My mother said that, even during infancy when she fed me my bottle, I would trace the designs on her clothing with my fingers so carefully that she believed I could’ve drawn them freehand had I been able to hold a pencil.  My older sister has vivid recollections of me playing with my imaginary playmates (Billy, Jimmy, Timmy, and Gay – all boys) and claims I fretted when places weren’t set for them at dinner.  I could go on and on about my childhood games, tall tales, and theatrical ventures!  So I’m not sure where my creative process originates.  It’s simply a given.  Creating always, always feels good to me – it comes from a joyful place, a state of rapture even. Fear only creeps in later, when it’s time to show the results to other people.

Meredith: How and when do you know in your gut that an idea is viable and worth creating? Is there a telling, pivotal or aha! moment?

MARIAN: Well, I’m not always right!  Like falling in love, that state of rapture can blind my better judgment.  My heart beats faster.  I start giggling and sometimes have to jump up and run around or dance.  When I commit to an idea, I do fall in love with it and let it have its way with me. Sometimes, as with my comic strip, I get lucky and it works. Other times, like the ten years I spent writing a very heartfelt but very unpublishable (i.e., bad) novel, my passion leads me astray.  I tried to write this particular novel in prose; that is not my talent or skill.  But I was in love!  I could not be stopped!  The people around me must’ve been barely buttoning their lips, itching to tell me Give it up, girl, as if I’d been in a marriage sailing through high chop and headed straight for the rocks.  I have no regrets, though.  However inefficient, that’s the way I work, and really, results be damned, isn’t rapture what it’s all about?

That said, when working on familiar terrain – writing and drawing combined – I’ve honed the ability to forecast results and save myself from a lover’s folly (most of the time…).

Meredith: I’ve loved your work, your comics for years (and years) as have millions. So, here’s a question: Are you first a writer or an artist? When you write do words come first, or images, sounds, a sensation maybe?

MARIAN: I’m an artist first.  Writing used to scare me, especially in school when they expected us to write papers that actually made sense.  Drawings flow easily from my mind and always have; constructing a narrative and centering it around a theme or point is more of a challenge. I can literally feel the difference between writing and drawing in my brain.  Sort of like the difference between tai chi and lifting weights.  Both are good, but one feels like floating in a timeless place, while the other makes you groan and sweat and you’re sort of glancing at the clock, wondering when it will be over.

My confidence in writing has grown over the years, ever since a meeting with my psychology teacher in college (her name was Lois Langland; she was a humanist psychologist).  I wanted to write a paper about William James and told her, “I don’t know how to write,” and she said, “Just follow your thoughts.  Trust them to take you where you need to go.” That was better advice for me than any analytical formula.  No one had ever encouraged me to listen to myself; they all wanted me to listen to them.

At this point, neither drawing nor writing feels complete without the other. The words are the skeleton.  The images are the muscles, guts, and blood.

Meredith: Are you a “big picture” writer/creator/artist, or do you take the Anne Lamott Bird by Bird approach? Can you tell us about it?

MARIAN: I do look at the big picture to stay sane and keep the creative process joyful. What happens afterwards, in the marketplace or with readers-cum-critics, can be a jagged terrain, but in a few billion years the sun will incinerate the entire earth anyway!  Isn’t that comforting?

The only thing that freezes me in my tracks is fear of rejection.  Having made myself sort of public for almost thirty years, rejection to some degree is inevitable.  For instance, my early Maxine strips often cut beyond the bone and into the marrow.  I was very young and unprepared for the strong pushback from some quarters.  A paper in Santa Barbara even received a petition signed by dozens of readers demanding that my strip be cancelled because, they claimed, it mocked violence against women.  I was trying to do just the opposite (a hazard of satire).  This experience did teach me to be more aware of how my message comes across; I really do care about others’ feelings. Still, it was painful to be completely misunderstood, and criticism still whacks me upside the head. Especially if it’s dismissive or snide.  A bad review can affect me for days before my confidence returns.

The marketplace has also obliged me to dance when injustice cuts in.  My comic strip Maxine first appeared in print in 1981.  A few years later, Hallmark Cards introduced a cartoon character called Maxine, an elderly “crabby” lady as opposed to my young feminist character.  The Hallmark Maxine grew into a huge commercial phenomenon, and several excellent lawyers advised me that there was nothing I could do about it.  Over the years, my Maxine – being rooted in insight and quirky perspective rather than mass appeal – became more and more marginalized while the other Maxine could hardly be avoided, even appearing on rolls of toilet paper.  By the end of 2002, I simply quit the strip to focus on books instead.  So we’re talking about twenty years of my life’s work that has been, at least in the eyes of the world, all but buried.

Meredith: How do you know when enough is enough—a frame in a cartoon, a chapter in a book? MARIAN: Cartoonists have a harder time knowing when enough is NOT enough.  It’s an economical art that requires you to pare an idea down to its absolute essence so, ideally, the reader “gets it” in an almost gestalt moment. It’s reductive, sort of like poetry, whereas most other writing is inductive. Writers take an idea and let it expand, so getting too longwinded is a pitfall.  A cartoonist’s pitfall is often the opposite: being too succinct.

Letting go of a piece when it’s finished is easier than it used to be.  Returning to my “in love” analogy, I used to grieve the ending and miss those ardent feelings along the way. Now I just set it aside and move on!

Marian Henley grew up in Dallas, Texas where the men are men, the women are women, and the children resort to drawing comics, she says.

Her professional career began when boys in her fourth grade class commissioned her to draw Dracula, The Mummy, and Frankenstein’s Monster (her Werewolf renderings were not, in her opinion, sufficiently freaky, so she refused to release them and issued refunds).  During these early days, she also sold quite a few Crayola drawings by going door to door, accurately sizing up most of her neighbors as too nice to pretend they weren’t home.

Today, Marian lives in Austin, Texas, with her husband and son. Visit her anytime at her website.

All images courtesy of Marian Henley.