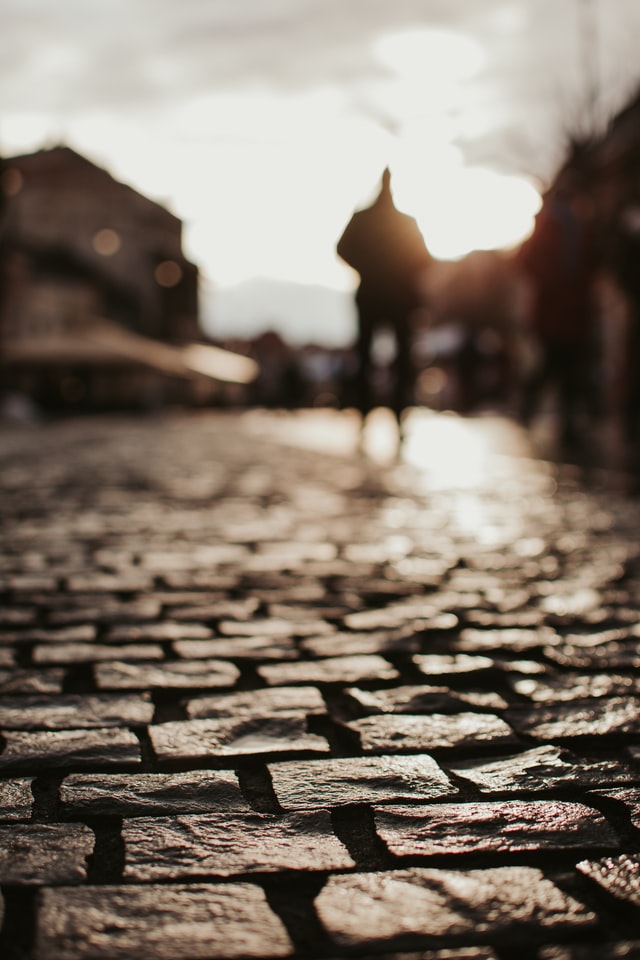 The writer goes deep about finally trusting her own style, writing what you absolutely love to read and how to make it happen—no matter what. Oh, and Richard Ford.

Meredith: Caring for your parent-in-law and then, writing the memoir, how did you keep from abandoning yourself both on and off the page? How do you know what’s most important when you’re writing?

ANDREA: I had absolutely no idea what I was doing, when I suggested that we pool resources with my in-laws and move together to a big house in the far north of Scotland.  I’d been blocked as a writer for a long time, at the time that we moved. Blocked isn’t [exactly] the right word because in the years since giving up being a journalist-editor, to child-raise, and then to be a carer, I’d written two

unpublishable novels and an unwanted (by editors) travel memoir of living in France. I wasn’t blocked exactly, but certainly in terms of the novels I’d written there was something fatally missing there, in terms of language, voice, commentary, analysis, and in the imagined world of the book. So many things that seem obvious now. I was so hungry to get the thing done and get the affirmation and move on to greater glory. What I produced didn’t really get under the surface of the narrative, and the world has enough shallow, surface-dwelling books.

I began to feel a sort of swelling and ripening: something I recognise now as a book pregnancy. Nancy [her mother-in-law] was passing into confusion and its concomitant hostility. She’d lost her prepositions: could no longer imagine on, off, under, up, down, behind. Words were deserting her but at the same time were swelling and ripening in me. Creative writing seeming impossible, I began to keep a diary of the day s.

Keeper didn’t start as a book, but as a book substitute. I’ve come to realise that writing a book substitute is a pretty good way of writing a book. It works: buy the notebooks, the pencils, open the notebook and wri
te a sentence down, a good book opener. That’s maybe all you need. The subconscious will start its work, and one sentence spawns another. Write down everything that’s in your head, without worrying about quality. Make notes: if there’s a book hidden among th em it will show itself. It’s an approach that seems to be working well for the novel I’m writing now. I had a scenario, I had characters, but no real idea how to proceed. So I made notes on them and put them in rooms together and made them have conversations, and that’s how the arc of the plot came about.

I would sit with my mother-in-law in front of the fire, she in her mysterious world of disease-prompted thoughts, staring and muttering and winding her hair round her fingers; me with notebooks and laptop, disappearing down a wormhole out of the present. It wasn’t possible to get physically away – it was a 24/7 job most of the time – so all that was available was this dimensional, virtual escape route, into the world of words and thoughts. I interleaved accounts of what was happening to Nancy with research I’d been doing into the science of Alzheimer’s, and that turned out to be the Keeper format.

There wasn’t really any time: I had to make it happen in the interstices of obligation, so most of it was done early in the morning and late at night. I wrote and wrote and it poured out of me: “Keeper – the Director’s Cut” would be about 3000 pages long.

Meredith: What did you have to unlearn to find your truth as a writer? What had to go? Can you share how? Was there a turning point to your own narrative?

ANDREA: I’d always thought that writers are born and not made. There are lots of bad books out there by people who want to be writers but who aren’t really. But if you’d judged me by my output 5 years ago you would have put me in the same camp. Now I think differently. I think born and made can be the same thing and it can happen any time. If you have the drive to make sentences into pages, if that drive is strong in you, it is ‘just’ a question of finding your authorial voice, a thing way more elusive than mere subject matter. If people ask me who are my important writers I often say Carol Shields and F Scott Fitzgerald and Richard Ford – all Americans, and as Yoda might have said, The Voice Is Strong In Them.

It’s interesting, thinking about the things I now see I was doing badly in the books I thought I was writing five years ago. One of the things was trying to write in a style that wasn’t my own. I wanted to write popular fiction, and the novel I attempted was in that style: plot-led and conversational. That isn’t really me, though. I’m the kind of writer, it turns out, who likes to pause and pivot on a moment. I suppressed this, though, thinking it uncommercial. Now, anybody could have told me that what’s commercial is writing done in its own voice, writing that works, that rings true even though it’s a fiction.

Post-Keeper, I’m confident about writing about what people are thinking. I’m more interested in how people think than what happens to them. How they think and how wrong they can be about what’s happening. That’s what interests me as a reader, and that should have been a clue, all these years, to how I should have been writing. It’s obvious really, isn’t it? What you buy to read, what you gobble down in two days: that’s almost certainly a clue to what kind of writer you are.

But getting back to your question: what did I have to unlearn? I had to unlearn that I was a failure as writer, and that’s difficult. We carry our failures with us, far too much. People hug their failures tight and cherish them. They allow themselves to be defined by them.

right: too many interruptions, too many duties, no room of my own, no clear idea of what I was to write about – so many conditions were imposed by myself on myself. But I wrote Keeper on my lap in a series of notebooks while sitting with Nancy in front of medical soap operas. It can be done anywhere. And I’ve discovered lately that even if I’m not in the mood or haven’t a thought in my head, just opening the notebook and lifting the pen opens the channels.

Even if it’s not beautifully phrased and important-seeming stuff—and often it isn’t—something comes out of it, always: a glimpse, a phrase, a new idea. Progress of a sort is always made. I used to read writers and despair because I couldn’t match them for brilliance and polish. But polish is something that comes with writing drafts. Start with something, anything, and improve and improve it. Keeper went to four drafts in the end and the novel’s already on its 6th. The “first draft” that my agent read was the actual fifth.

Meredith: Was the process of writing the memoir more or less emotional than caring for your parent? When you wrote did you relieve, reevaluate or something else? Or was it done simultaneously? Where do you find perspective—and where did you lose it?

ANDREA: The process of writing Keeper was daily, it was fast, it was an outpouring (of facts) that turned pretty quickly into an unleashing (of a sensibility at work on the facts). It was an unemotional process and that was the point. Too many emotional days had left me drained. It was an antidote to that life lived with Nancy and her fears and accusations. It was a gloriously cool, cerebral thing. Cerebral and private. Nancy couldn’t find me there, in the sentence-making; she couldn’t touch it. And when you think about it, it was truly ironic that I should be finding solace from a dementia-carer’s life in precisely the activity that had most devastatingly been denied Nancy: the world of thinking and analysis and the sequential steps of creation. I was able to do that writers’ trick of giving random events shape and meaning and making cohesion out of chaos. It was as far away from Dementia-Reality, the Dementia-Culture, as it was possible to go without leaving the house.

It was tough on occasion being interrupted by Nancy while I was away off in my own world of words. But that wasn’t particular to being a dementia-carer, it turns out. I feel just the same now when I’m mid-sentence and in full flow and it becomes apparent that I need to do something else or pay attention to real people: that a child has been standing in front of me talking for 2 minutes and I haven’t noticed…There are always other things you ought to be doing.

ANDREA: Ultimately, I write for psychic survival. I don’t know how else I would cope with the voices of the unlived lives and the unexpressed people that talk to me. I’m not talking about novels, or even about fictions when I say that.  I was trying to explain this to my (civilian) husband the other day: that I’m constantly narrating, whether I’m writing or not, and even as I’m living something I’m framing it into a paragraph. This can be a burden, though, as all of us know. It’s difficult to live properly in the present when you’re constantly roaming forward and back, stitch-stitch across the day: a person can suffer from too much perspective, too much overview: it can imbue life with too much distance and objectivity. Something I find borderline worrying about getting into writing as a life is that I need people less. The more involved I get in the narrative the less verbal I get. I feel bad when my husband confesses he thinks I’m growing withdrawn and possibly depressed, when the truth is that I’m very happily engaged in the world of my own secret narratives.

Meredith: What is your favorite writing quote of all time (at least for today!). Now answer this: do you live by it?

ANDREA: Favourite writer quotations change week to week, but this week’s is one from Richard Ford, a sentiment expressed by his hero Frank Bascombe in The Sportswriter:  “All we really want is to get to the point where the past can explain nothing about us and we can get on with life”.

I don’t know if this is true or not—knowing what I know now about memory and how crucial it is to identity. Our pasts are what we are. But I quote it to myself when I’m feeling dragged down by the old failures, and when the present feels too coloured by them. I started writing books aged 8 and have had my first commercial success 40 years later. The thing is just to keep going. Every time you pick up your pen is a new start. This seems like a banal sort of message but living as if it’s true is actually quite difficult.

ANDREA lives with her family in the UK where she’s at work on a novel. See what she’s up to any time by following her on Twitter.

Photo by Nagy Arnold on Unsplash