stuck/unstuck: Back to writing after baby arrives: Yuvi Zalkow 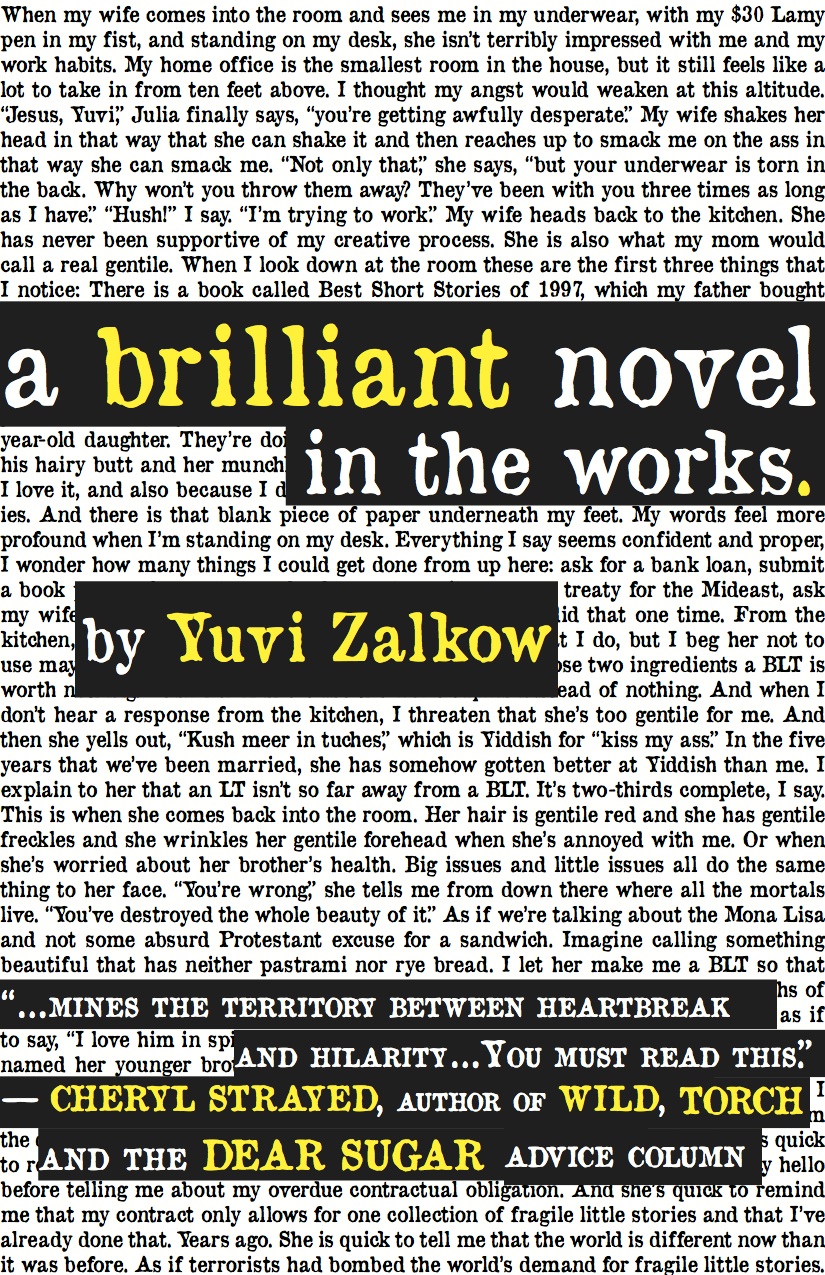 This piece first appeared in 2012. In light of the current public health crisis and with so many staying at home with children and trying to work—and write—at the same time, it seemed appropriate to take another look.

What was the hardest part about getting back to writing after your kids were born, and did you have to do anything special to get back into the swing? Did something change? Get easier/harder? Why do you suppose this happened to you?

In this installment of stuck/unstuck, I asked Yuvi Zalkow to answer this question. Yuvi Zalkow’s debut novel, A Brilliant Novel in the Works, will be published by MP Publishing in August of 2012. His writing has appeared in Glimmer Train, Narrative Magazine, Los Angeles Review, Carve Magazine, and others. He is also the creator of the shame-filled video series, “I’m a Failed Writer.” He has over 500 rejection letters in his desk drawer. For more information, check out his website and this book trailer that raises as many questions as it answers (and why you’ll love it as did I).

“Before my kid was born, I was terrified that it would mean the end of my life as a writer. It was already hard to squeeze in writing before the kid and it made no sense to me how it would go with a baby in the picture. But the intensity of having a child (and the amount of time it requires) put me in an entirely new plane of existence. So many unnecessary tasks had to fall away to function in this new life. The great thing, however, is that I became more efficient with my time than ever. This isn’t something I was consciously doing — it just came from necessity or instinct or both. Sure, I had moments where I was too much of a zombie to do anything coherent, but I was also getting more things done in a day than what I ever imagined possible (even if many of those things involved diapers or poop or burping or feeding). After a few weeks of adjusting to this new life, I began to fit writing back into the schedule. The key for me was to change my expectations. I forced myself to write with a less idealized image of what writing is supposed to look like. I didn’t need four hours at a time…. twenty minutes was acceptable. I didn’t need to write every day… 3x a week was fine. Sometimes I wrote on my iPhone while rocking my child to sleep. Sometimes I wrote in the bathroom. And so forth. I also started with smaller projects before I got back into big, scary novel-sized things. I’d say that I’m even more dedicated as a writer now that I’m a parent than I was before having a child. Go figure.

Actually, I did a video about time management and basically my suggestion to others (jokingly) was to have a baby. Because it made me efficient in a new kind of way. And I wanted to analyze that efficiency, both to help parents and non-parents.”

[Visit Yuvi’s site for a library of his brilliant videos that will have you laughing, crying, nodding your head, shaking your head….”]